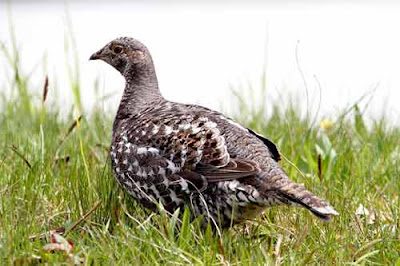 There's a female Sooty Grouse that likes to live dangerously close to where I live. Drivers on the highway often have to slow down or stop entirely so that she can cross. Sometimes she just stands there staring off into space. I don't think she's "all there" and I'm keeping my fingers crossed for her.

I took the above picture during one such encounter. She was meandering along the shoulder of the highway with not a care in the world apparently. She let me get very close to her and in fact started walking towards me a few times. The picture below is one of those times...she hopped up onto a rock divider and was even feeling so laid-back that she stretched a little. 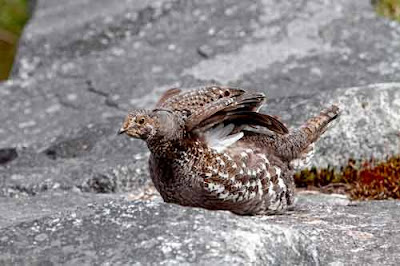 After I took this picture she got it into her head that she really needed to head over to the gas station. I couldn't persuade her otherwise. I tagged along, making sure that she got across the highway alright. Luckily no cars were coming at the time. But the gas station was so busy that I decided to steer her away from it so I ushered her into the field across the street. She settled into the grass for about five minutes. 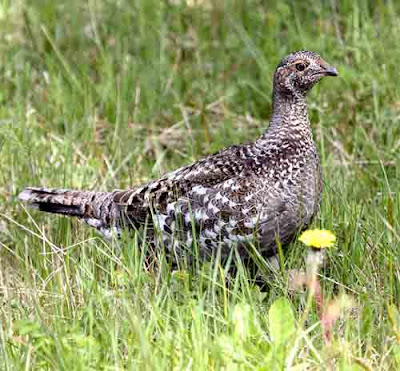 While she was sitting in the grass I shot a little video of her. If you want to check it out, have a look at my videos of birds on my other website, Fun Nature Photography.
I probably spent over an hour altogether babysitting the grouse until I finally had to get going. I saw her about a week later standing directly in front of a car at the stop sign leading onto the highway. The woman had to get out of her car to get the grouse to move. Oh, the power of a grouse!
Posted by Peggy Collins at 9:50 AM