One Squirrel Goes and Another Arrives

People are starting to call me the Squirrel Lady, and with good reason. I've gone kind of nutty about squirrels (if you'll excuse the expression). Squirrel pictures take up a good part of my table at the art fairs and farmer's markets where I sell my photographs most of the year.

We get the cute Douglas squirrels here on the Sunshine Coast of British Columbia. They aren't as aggressive as their bigger grey brothers and sisters. Despite the occasional battle, I usually have only one squirrel that comes around for the nuts and seeds that I put out. And I always get very attached to that one squirrel.

My first squirrel was Squiggy, who visited me for over three years. Squiggy got me started in my career as a squirrel photographer... 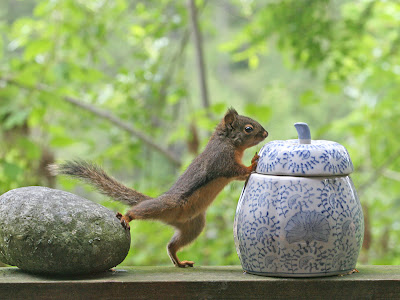 Squiggy Squirrel and Cookie Jar
Tipsy came next. I introduced you to Tipsy in a previous post. Tipsy was an amazing model and would do anything for a peanut. 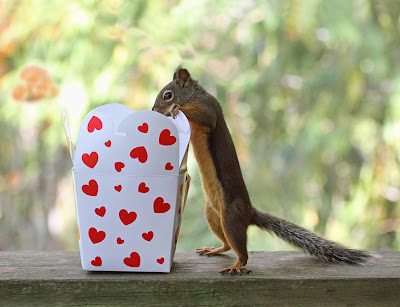 Tipsy Squirrel in Valentine Box
Unfortunately Tipsy was only around for about six months. I still miss her terribly.

I was without any squirrel friends for a couple of months until finally a new one started showing up. She's very nervous so I call her Nellie (as in Nervous Nellie). I've been courting her with peanuts stashed behind a broom on my back deck. I have to hide the peanuts because if I don't, the ever-watchful and greedy jays will gobble them up. I know it's Nellie who's getting the peanuts because she usually leaves little pee puddles behind. Please don't think less of her because of this habit though. As you can see, she's really quite adorable. 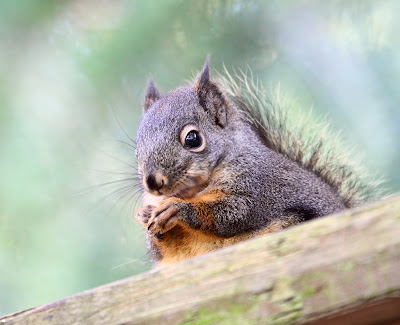 Nervous Nellie on my Deck
I'm slowly but surely getting Nellie used to me and only have a few pictures of her so far. Here's another shot of her soon after she discovered that I carry a mug full of peanuts around for the chickadees. 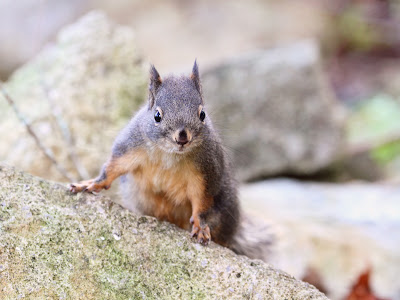 ﻿Nellie Squirrel on the Rocks
A few years ago I decided to make a calendar of some of my squirrel pictures. At that time all of my photos were of Squiggy, my first squirrel. But now I've had the pleasure of being entertained by quite a few different squirrels and so of course I have many more squirrel pictures to show for it. I hope that Nellie eventually loses her shyness and becomes a regular model!
Here are my 2012 squirrel calendars﻿...

﻿Please click on the calendars to get a closer look. You can flip through their pages online and you can even rearrange the pages any way you like to personalize your calendar.
Happy 2012, from the Squirrel Lady!
Posted by Peggy Collins at 10:22 AM