One of my photographs has been published in "Best Wildlife Pictures 2012", a collector's edition of Canadian Geographic magazine. This special edition has been on the shelves since October and apparently is still available. I forgot to do some bragging about it earlier!

The magazine (which is almost more like a book due to lack of advertising) shows off the impressive talent of my fellow Canadian nature photographers. I felt very honoured to be included.

Here's the picture that was published, which introduces a section about animals and water. 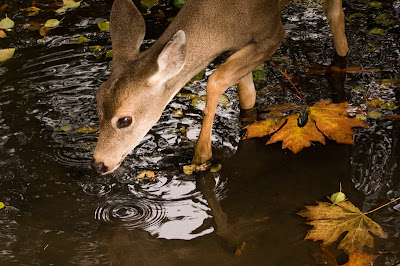 Deer Fawn Bobbing for Apples
Here's the story behind the photograph... I'd seen four deer (two older fawns and two adults) visit the creek a couple of days in a row. They were after the crab apples that grew by the creek. The ravens and crows were feasting on the apples but would knock part of their bounty down into the creek.
So I waited on the boardwalk overlooking the creek and sure enough, this fawn made an appearance. ﻿He sauntered towards me, pretty much oblivious to my presence, seemingly entranced by the possibility of some fine crab apples. I had to actually back up to take the photograph. In the picture you can see a couple of huge big-leaf maple leaves, which makes this picture all the more Canadian...in case you didn't know, our flag has a maple leaf on it.﻿
For anyone who enjoys nature photographs, or for you aspiring photographers out there, do yourself a favour and pick up a copy of "Best Wildlife Pictures 2012". I guarantee you'll love it!
﻿
Posted by Peggy Collins at 5:19 PM