Lately I've been in the mood to work on flower photos, mostly because we've had very stormy weather around here. In particular this past week we had some amazing wind storms and ended up with a good-sized tree coming down over the power lines that lead to our neighbour's house. The tree snapped through his phone line and was cradled by the power lines and a dogwood tree next to our house. Lucky us that it didn't crash through our roof! A man went up in a cherry picker to attach an enormous cable to the tree and it was airlifted up, up, and away. Just in time for the next big storm that was coming through!

We also got a light dusting of snow on the pot of daffodils that just started blooming by our place. So all this crazy weather put me in the mood to work on some flower pictures.

I like photographs of flowers straight out of the camera but I also enjoy adding floral designs or "textures" to my flower pictures.

Here's an example of a macro shot of some lilacs ~ 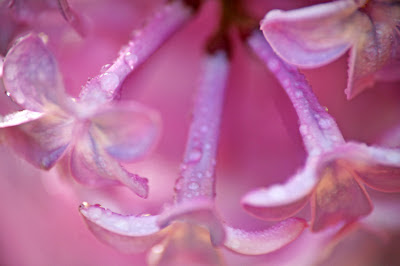 Lilac Blossoms
﻿Here's another version of the same picture after I added a damask swirl pattern in Photoshop and changed the hue and saturation slightly. 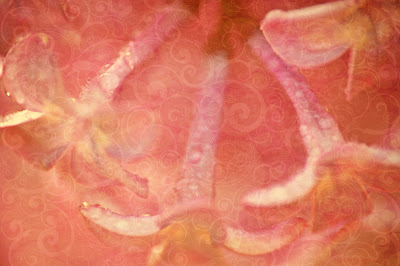 Lilacs Macro with Overlaid Swirl Pattern
Looks quite different, doesn't it? I really like that pattern and used it here with my picture of lavender flowers﻿ but this time I didn't change the hue as much... 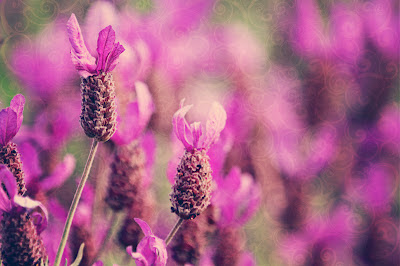 Lavender with Floral Pattern
Or maybe you like your flower photos a little more natural... In my next picture I left the lavender garden as it was, with some colorful orange flowers blurred in the background. By the way, this out-of-focus area is called "bokeh" in photography and is achieved by leaving your camera lens open to its widest aperture...by doing this, you get a pleasing blur which can be especially effective if the background is wet or lit by bright sunlight. 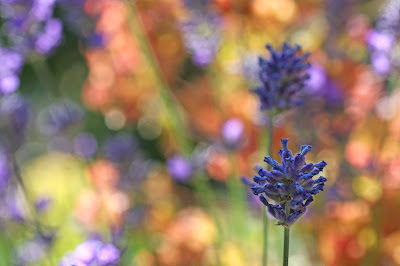 Lavender Garden
One of my favorite flowers is poppies. Last summer I had a job photographing somebody's garden and he had some lovely pink poppies. I added a light green background and overlaid a different floral damask pattern to this picture and came up with a softer version... 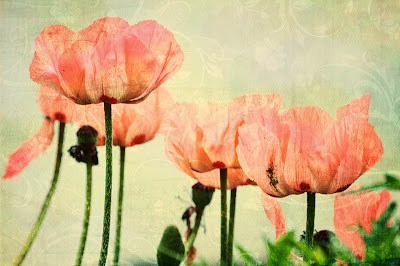 ﻿Pink Poppies with Floral Damask Pattern
And what would springtime be without tulips? They're one of my favorite flowers to photograph. For my tulip picture I added the same damask pattern as above but also did some other adjustments in Photoshop﻿, such as adding another texture and messing around with the saturation levels. I also added a vignette effect. 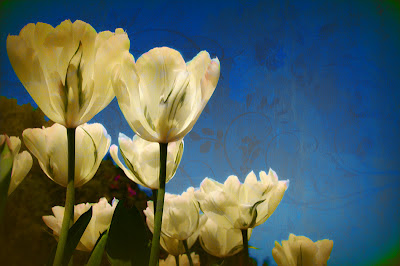 White Tulips with Floral Damask Pattern Overlaid
I took this photo close to where the ferry docks at Horseshoe Bay (in West Vancouver, British Columbia), which is a very picturesque area in case you haven't been there. The flowers were conveniently placed in a planter a few feet above my head so that I could photograph them against the blue sky when I stood on the walkway beneath. How thoughtful of them that I didn't have to get into my usual lying-on-the-ground-in-public position to take a flower photograph! (I wonder how many times I've been asked, "What are you taking a picture of?" when assuming some of these strange contorted positions in public.)
For you purists out there, here's the same photo of white tulips ﻿au naturel, without the addition of any textures or patterns, and without any adjustments in Photoshop... 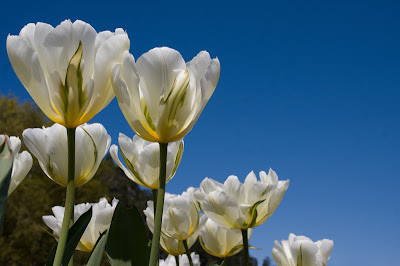 White Tulips Against a Blue Sky
Which do you prefer?
Hopefully we'll be getting some decent weather soon and when we do, I'll do another post with flower pictures. It's cheered me up a lot just posting this!﻿
Posted by Peggy Collins at 4:48 PM