Encounter with a River Otter

I've been having some close encounters with a river otter lately. Some people around here aren't too crazy about otters because they sometimes get into boat houses, eat their smelly fishy meals there, and use the place as an outhouse. But I have a fondness for otters.

The other day I was photographing some gulls down by the ocean shore at low tide. I was just leaving when I heard a splash. I thought I saw a head in the water. So I snuck back down the ramp to the dock and sat down. Sure enough, an otter surfaced with a big fish in his mouth. He was swimming straight towards me...I assume he was planning on enjoying his meal on the dock. 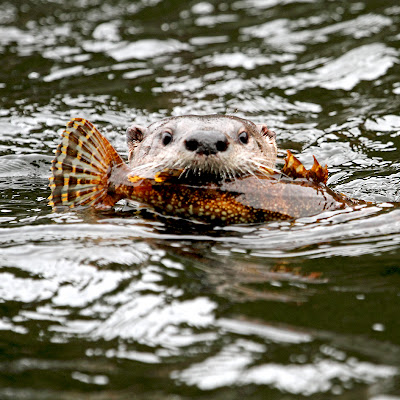 River Otter and Fish
By the way, my husband tells me that he thinks the fish is a greenling. Anyway, when the otter saw me he dove under the dock and vanished. He was about six feet away when I took the picture. We were both very surprised by this encounter!
The next day I hoped to meet with my new friend again so I went back to my post on the dock. I wasn't disappointed. The otter seems to like to fish for eels around low tide and there he was, catching one after another.
Soon the otter left the water and climbed the rock cliff to a grassy area. I've never seen a river otter out of the water before and was quite surprised at how big and powerful he looked. He reminded me of a dinosaur...a brontosaurus, to be specific. 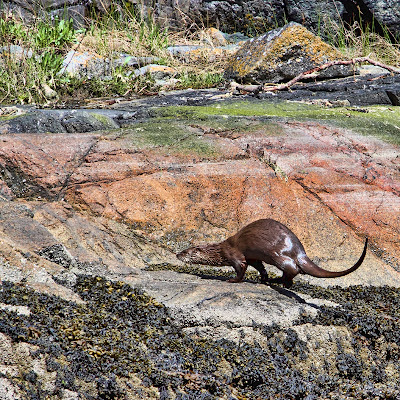 ﻿River Otter on Land
I watched as the otter found a shady spot under a tree and began to roll around joyfully. Every once in awhile he'd stop rolling around and survey his domain. 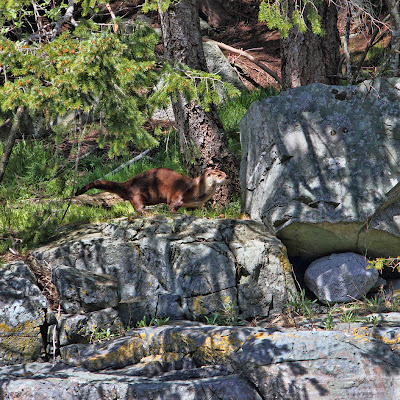 River Otter
By the way, if you see an otter out of the water, chances are very good that it's a river otter and not a sea otter. River otters have dens on land and sea otters spend almost all their time in the ocean. River otters walk easily on land and can be found in either fresh water or the ocean.
After about 45 minutes of rolling around his grassy haven under the tree and occasionally spraying the perimeter of the area (!!) the otter descended the rock cliff so that he could return to the important business of catching more food. 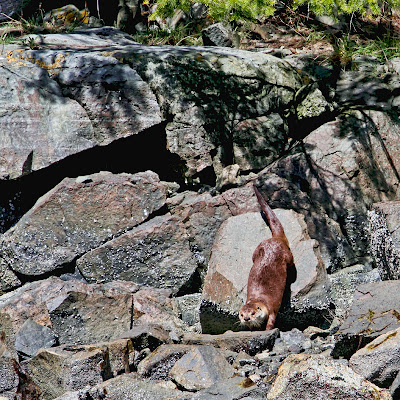 River Otter on Rocky Cliff by the Seashore
Another good way to tell the difference between a river otter and a sea otter is that the river otter swims belly down, so that you see some of his back in the water. The sea otter swims belly up...they're the ones you sometimes see pictured with a buffet of clams or some such delicacy spread out on their belly like a buffet.
Otter watching can be kind of addictive, so I think I'll head down to the ocean now and see if I can have another close encounter with my furry friend!
Posted by Peggy Collins at 1:23 PM