Usually I see herds of Roosevelt elk fairly often on my morning hikes with my two dogs. But they've been conspicuously absent ever since I found the carcass of a young elk back in February on the day I saw my first wolf and two bobcats. I think they got spooked from the area.

In May I was hiking in a new area and had just emerged from a trail through the woods when I came across a small herd of elk lying down in a field. A male and female stood up to gaze at me. 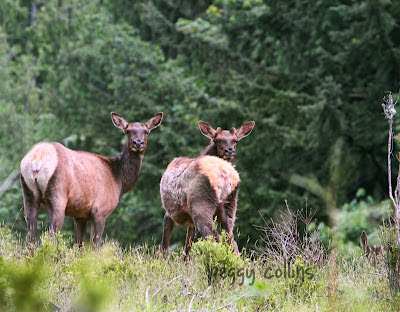 Male and Female Roosevelt Elk
Can you﻿ see the ear of a third elk lying down on the right-hand side of the picture? Once he'd spotted me, the male elk took time to urinate then the herd casually trotted off into the surrounding forest.
A couple of weeks later I came across a larger elk herd in my usual hiking spot. 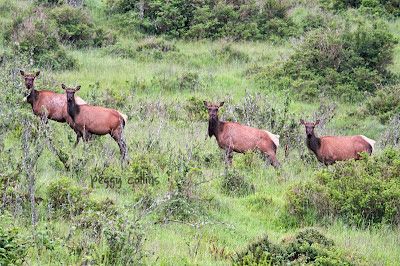 ﻿Roosevelt Elk Herd
This time the elk were very close to the edge of the forest but for some reason they chose to run across the path directly in front of us instead of disappearing into the woods. Then they paused to have a bit of a stare-down session. The dogs bounced around on their leashes a bit and the elk trotted off into the forest on the other side. They do this once in awhile...instead of disappearing into the forest closeby, they choose to run in front of me and go into the forest on the other side. I can't figure this behaviour out! But I appreciate it because it gives me a better chance to get a few shots of them. I hope to see some baby elk soon!
﻿
Posted by Peggy Collins at 5:03 PM No comments:

I recently released a new e-book called "Life Lessons from My Animal Friends". The book has 25 of my favorite animal photos taken over the years, paired with inspirational and humorous sayings. This book is the second in a series and it's available from Amazon  (for Kindles) and Smashwords (for different readers and formats). You can download a small sample for free from either site but the Smashwords sample is bigger. 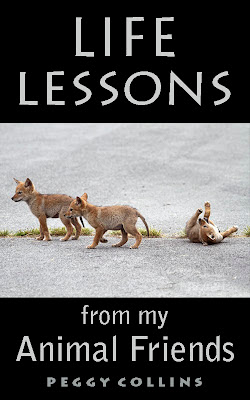