We took a trip to Vancouver Island last week and spent a couple of days in the Comox/Courtenay area, which is our favorite spot (so far!) on the island. We've camped there many times the past couple of years but this time we stayed overnight in a motel with our two dogs. The dogs were on their best behavior, so it all worked out quite well.

I've never seen a sea lion before so it was amazing to discover about 20 of them lazing around on a dock and the side of a boat next to an oyster processor close to Fanny Bay, south of Courtenay. We almost drove right past them but my eagle-eyed husband spotted them in the distance. We walked down a ramp and were very close to them. I never realized how big they are and what a racket they make! They bark almost constantly. 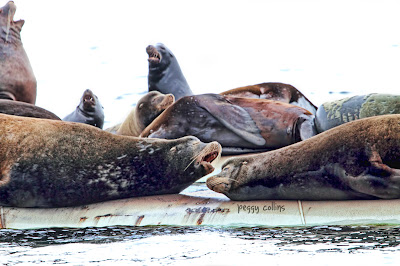 Steller Sea Lions
Those two sea lions in the centre really amused me...they'd be sleeping nose to nose then suddenly one or sometimes both would rise up and start barking in the other's face.
The Steller sea lion (Eumetopias jubatus) is a near-threatened species of sea lion from the northern Pacific. It's the largest of the eared seals and is smaller only than the walrus and elephant seals. Their species has unfortunately suffered significant and unexplainted declines in population over a large part of their range in Alaska in recent decades.
On average, male sea lions grow to just under 10 feet, and weigh about 1,200 pounds. Females average under 8 feet in length and weigh about 600 pounds. You can see the difference between a male and female Steller sea lion in the photo below. 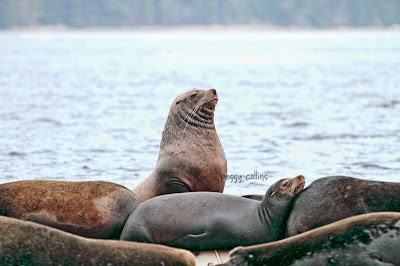 Male and Female Sea Lions
I'll be posting more about our trip to Vancouver Island very soon but I wanted to share the sea lions with you first!
Posted by Peggy Collins at 1:45 PM