I've been out mushroom hunting a lot lately and noticed it's a very good year for shrooms! Although I haven't managed to find any chanterelles (my absolute favourites), I found plenty of boletes since I've been hiking in some new spots. Boletes can get kind of slimy when cooked though, so you have to dry saute them. So far I've made mushroom soup, mushroom sauce for pasta, turkey and mushroom a la king (with leftover turkey from Thanksgiving), and this morning I had an omelet with some boletes, red peppers, spinach, and cheddar. Yummy!

My other mushroomy news is that my photograph of pholiota mushrooms won first place in a local contest held by SHROOM (Society for the Hunting, Recognition, and Observation of Mushrooms). 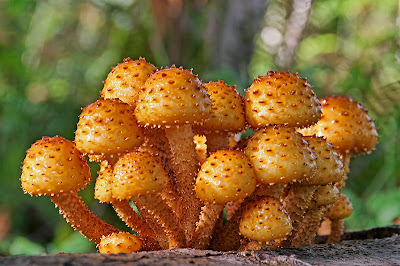 Bristly Pholiota Mushrooms
The mushroom festival was celebrating its fifth year and our community hall was packed with interested people checking out the displays of mushrooms, cooking, and all kinds of mushroomy wares for sale.

It's not too late to get out there yourself and do a little mushroom hunting. Just be careful and make sure you know what you've picked if you're going to be eating them. I own a few mushroom identification books, just to be on the safe side. Mushroom hunting can be a fun addition to any hike.
mushrooms art
Posted by Peggy Collins at 4:10 PM