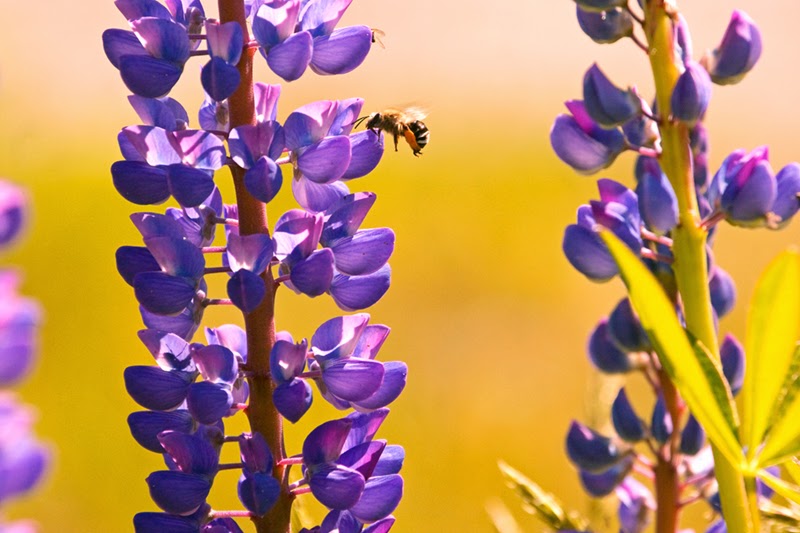 Sometimes I like to try to create a totally different look from a photograph. I might just be a frustrated painter, coming from a family of painters like I do...my grandmother, father, brother and sister are all painters. But it's something I've never really pursued much until recently.

I do some painting now, mostly for backgrounds for photographs, which I then layer on in Photoshop. I guess you'd call this digital art but here's a question for you: What is digital art exactly? Is it when you create something totally on the computer? Can it encompass digital collages? (By the way, that's something else I like to do.)

I love playing around in Photoshop. I start with a photograph or a collage and layer one or more "textures" on. A texture can be anything from another photograph such as rusted metal or clouds, to something that's been painted either on the computer or traditionally, with paints and brushes.

I played around with the image of a bee flying towards lupins that's pictured above...I ended up doing so many things to it, I don't even remember everything! That's what happens when you're creating something like this...you can lose yourself in the moment, totally absorbed with the effects. 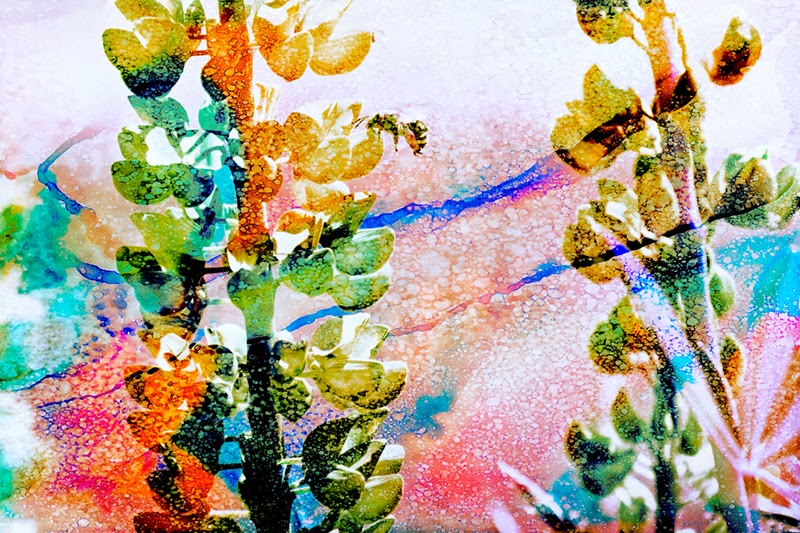 Flight of the Bumblebee

I realize the end result isn't for everybody, but I really like the way this image ended up. To my eye it's colorful and fun and looks more like a painting than a photograph. And that's a look that I personally enjoy.
lupins art
Posted by Peggy Collins at 6:03 PM No comments: 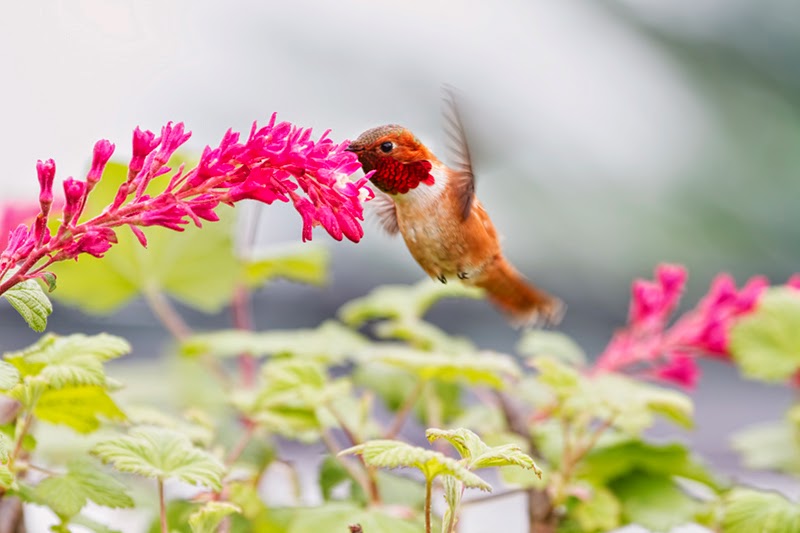 The other day I discovered a patch of red flowering currant in the village where I live. It's a bush that grows wild in the springtime here. The hummingbirds love it...they have a thing for red tubular flowers, so it fits the bill (so to speak) perfectly for them. 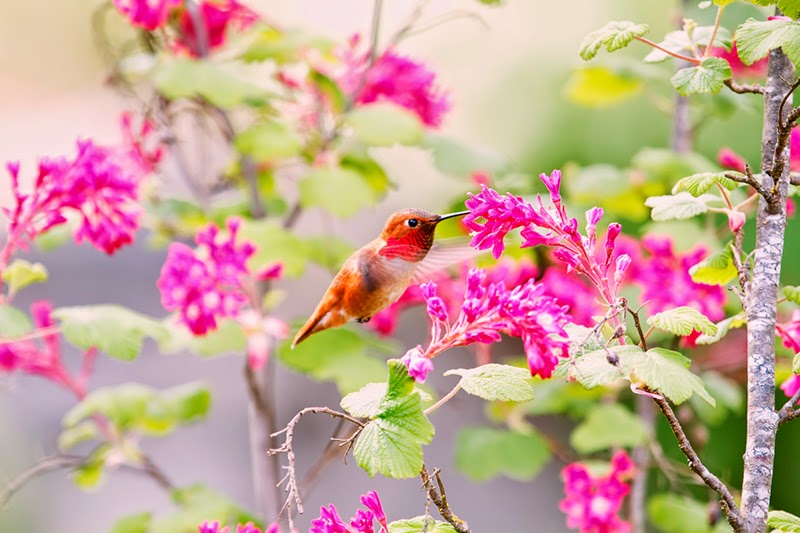 The hummingbirds have been coming to our feeders regularly since mid-March. I had a little photo shoot with one the other day...he was quite brave and let me get close. In fact, I'm pretty sure this is the same bird that landed on the hummingbird feeder as I was about to hang it up after refilling it with nectar. He sat down and drank his fill as I held the feeder out at arm's-length. It was a thrill! 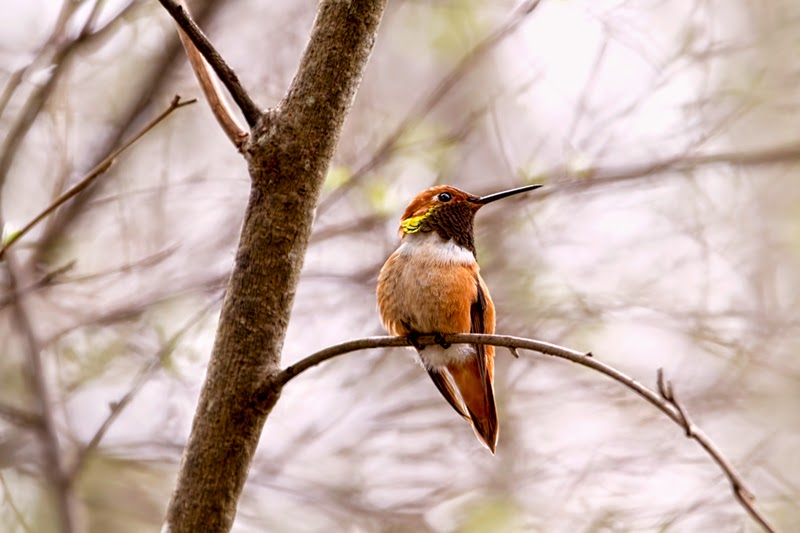 
hummingbird and flowers art
Posted by Peggy Collins at 1:18 PM No comments:

Butterfly On My Finger 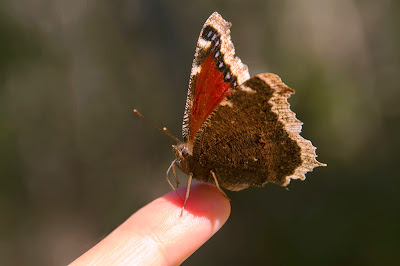 Butterfly on my finger
I had an interesting time with this butterfly (which is called a Mourning Cloak, by the way). I went for a two-hour hike the other day and returned to my car to find this butterfly fluttering about in the sunshine. It soon landed on the rim of my tire and inched along with its probiscis down, seemingly licking salt from the tire. I watched it for awhile but had to get going so I picked it up, expecting it to fly away. But it stayed on my hand, inching along (which really tickles, by the way), looking as though it was maybe licking salt from my hand. At this point I became kind of enchanted!
Butterflies "drink" nutrients through their probiscis, which acts like a straw, and they're attracted to the sodium in salt and sweat. So I guess I was a little sweaty after my two-hour hike and the butterfly took advantage of that.
Eventually the butterfly flew away again but returned to my tire. And so it began...I picked it up and took its picture and after awhile it flew back to my tire. We did this routine a half-dozen times. I even shot a short video of the butterfly in my hand.
The Mourning Cloak butterfly (called a Camberwell Beauty in England) is often the first butterfly seen in the spring. Not only was this the first butterfly I saw this spring but it was definitely the friendliest too!
The Mourning Cloak also landed on some "normal" things like plants and rocks. Here's another picture I took of it: 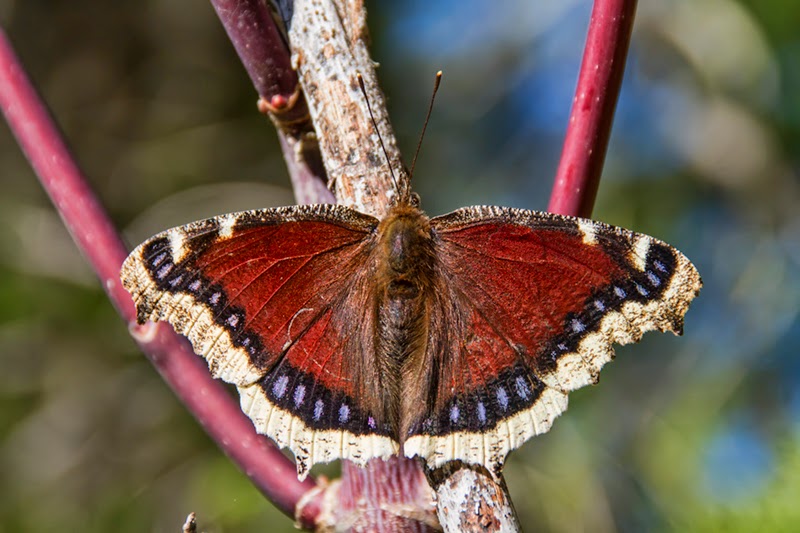 Mourning Cloak Butterfly
I thoroughly enjoyed my butterfly experience...I got kind of attached to the little beauty and hated to leave!
butterfly art
Posted by Peggy Collins at 2:24 PM No comments: 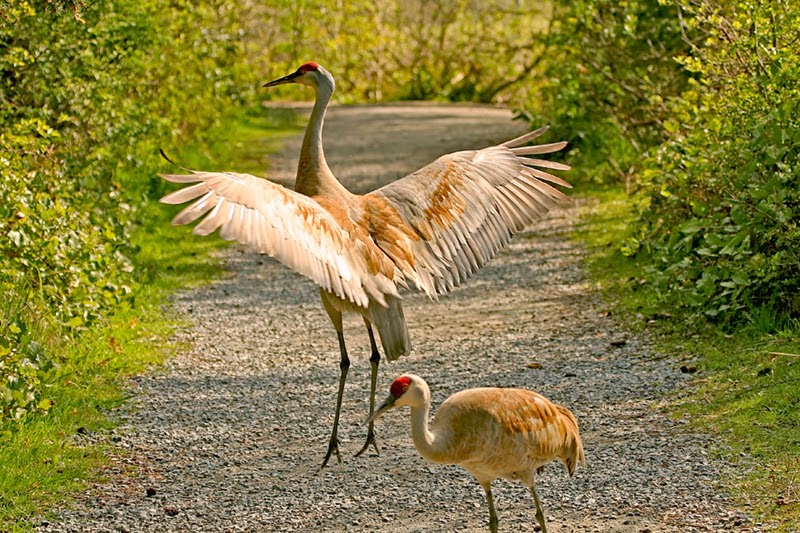 Sandhill Crane Displaying
To celebrate spring, I'm having a 25% off sale in my online gallery at Fine Art America for the month of April (this year only!) I have nature photographs, vintage collages, and digital art available that can be printed on paper, acrylic, or metal, or as a wrapped canvas. Artwork can be printed in any size you wish and you can easily view your choice online and match it up with the perfect mat and frame. The quality at Fine Art America is top-notch and your satisfaction is 100% guaranteed.
To receive your 25% off discount this April, please use the code GDXRTJ when you are checking out.

And happy spring to you!
sandhill cranes art
Posted by Peggy Collins at 1:32 PM No comments: