I sometimes like to play around with my photographs and add various effects and textures to them to give an image a more painterly appeal. As I showed in an older post, all nature photographs can be treated in this way, but one of my favorite subjects for textured images is flowers. 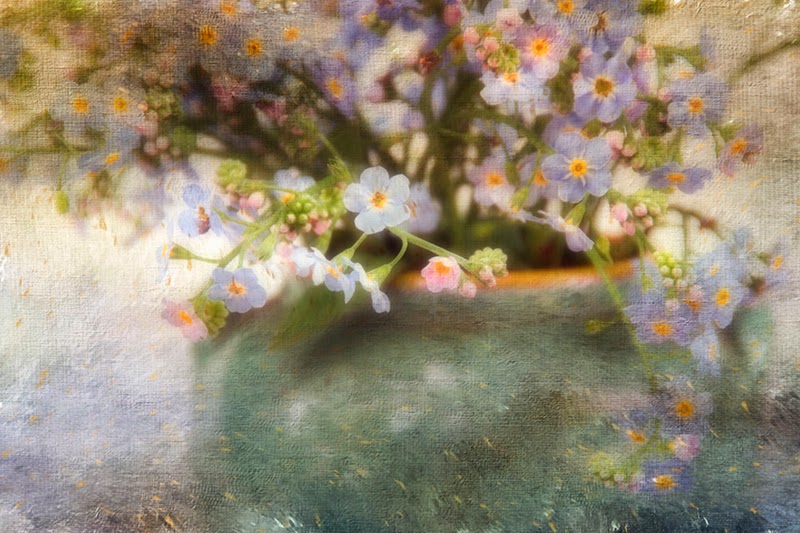 I added several filters to heighten the dreamy quality of the forget-me-nots in the above photograph and then layered on a few painted textures as well. I also played around with the tones. Photoshop gives you endless possibilities for different looks to your images...I find it thoroughly addictive!

But not everybody likes this look. Do you like your nature natural? If so, you might prefer the image below...although I still played around with the forget-me-nots in this shot to enhance the softness of the flowers, it's much closer to the original. 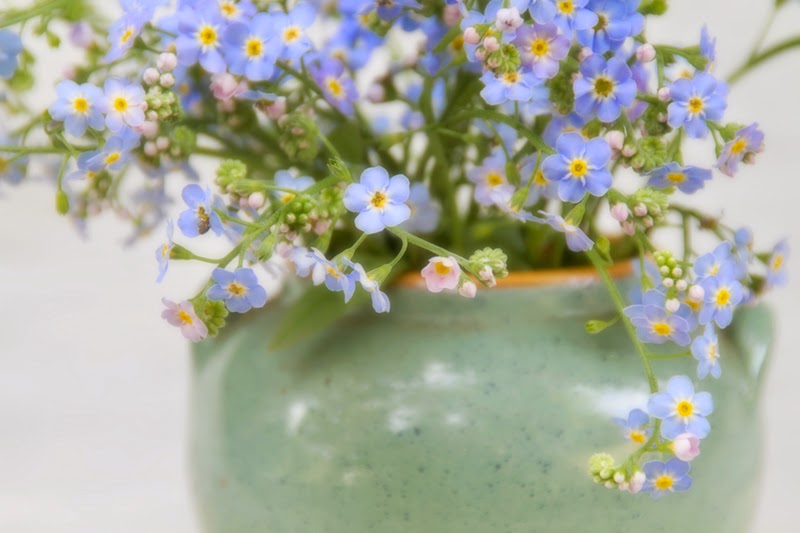 
So which photograph do you prefer, au naturel or painterly?

forget-me-nots art
Posted by Peggy Collins at 9:05 AM No comments: 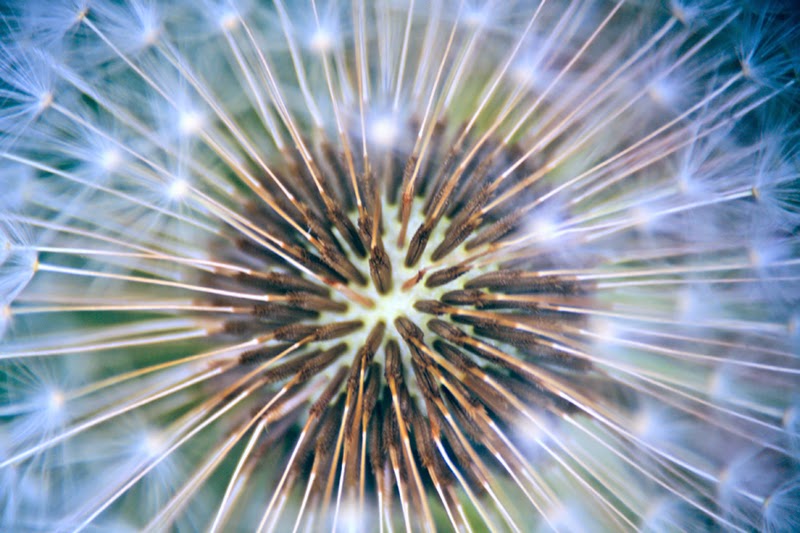 My photographs were recently published on the front and back covers of ZOOM magazine, which is a fantastic publication about life on the Sunshine Coast. It's packed full of photographs and articles that often focus on the work of artists who live here. 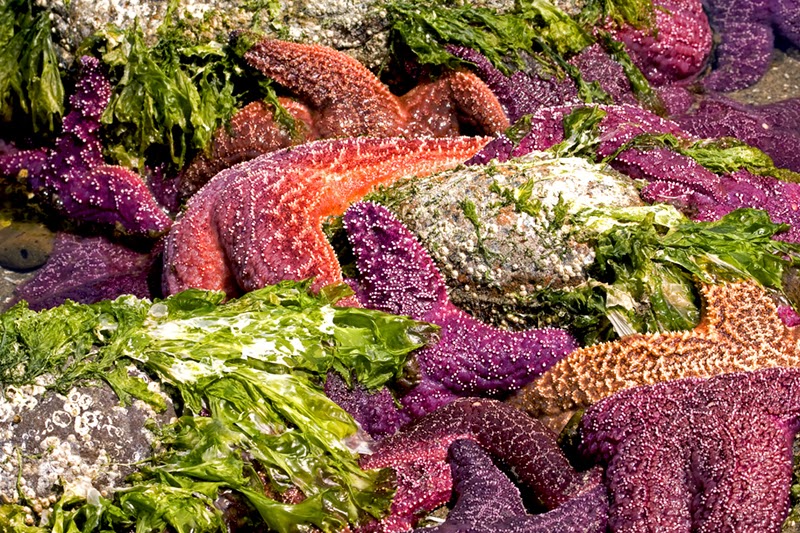 Starfish Photo on Back Cover of ZOOM

Also, a starfish photograph that I took several years ago is on the back cover of ZOOM. As you may have heard, starfish are dying at an alarming rate, with a mortality rate estimated at 95 percent. Entire populations have been wiped out in the Salish Sea off British Columbia's coast (where I live) and in Puget Sound off the coast of Washington, as well as along the coast of California. Last summer when the outbreak began I noticed we still had a plentiful, healthy population here and I still see lots of starfish in the harbour here.

Getting back to ZOOM magazine, a photograph I took of a group of pholiota mushrooms was also published because it won first place in a mushroom contest.

I've been published in ZOOM five times now. If you'd like to see the digital versions of these magazines, here are some links for you to check out starting with the most recent:

Here's a warning though: once you've had a look at these magazines, you'll probably want to move here!

dandelion art
Posted by Peggy Collins at 11:54 AM No comments: 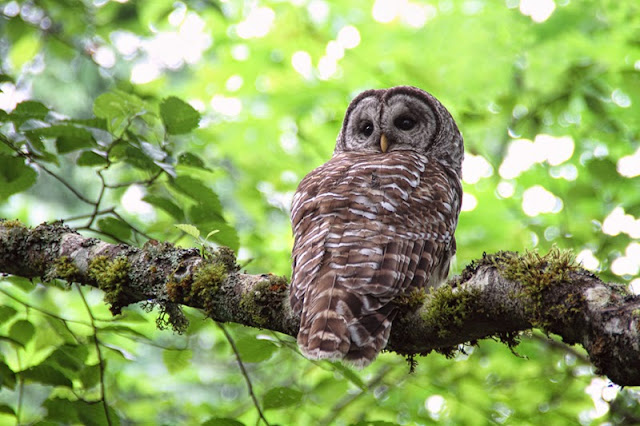 It's fairly rare for me to see an owl in the daytime (or any other time for that matter), especially considering I walk in the woods every day. Because they usually roost during the day, you'd probably never even know that an owl is around unless one happens to fly by you.

However, I lucked out and discovered an area where a barred owl can be found most days. The first time I saw him he flew across the path I was walking on, and he was being pursued by really angry robins. I've visited with him half a dozen times since then and usually I can find him if I just follow the sound of robins chirping in a certain insistent way. It's unbelievable to watch the robins harassing the owl...they fly by, usually bashing into him, over and over again. I feel really sorry for the owl. At first I assumed barred owls only ate rodents but I looked it up and discovered that they also eat birds (including other smaller owls) and snakes. 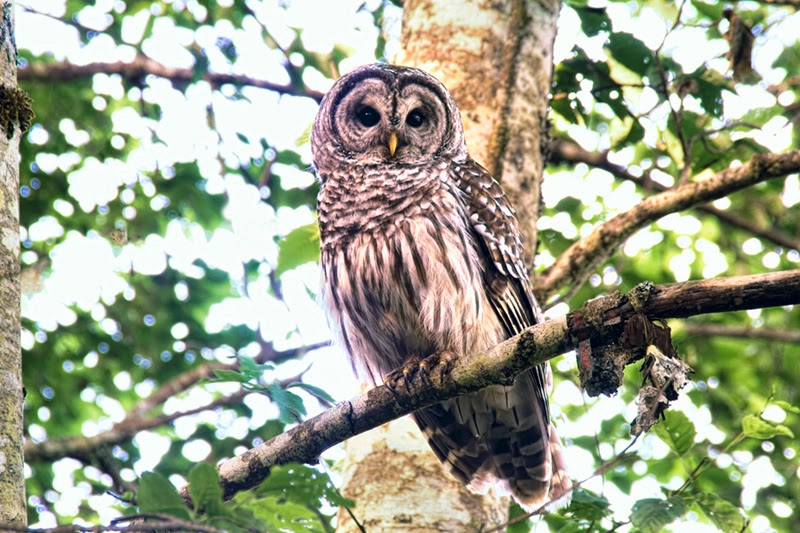 In fact, my feathered friend (who I named Buddy) has a taste for snakes. I've watched him hunt and eat two snakes. Buddy seems very comfortable with me now...he actually flew to a closer branch before eating his meal the second time he caught a snake. Thanks for sharing, Buddy! I don't know what I'll do if I ever see him catch a squirrel or a bird...that's something I don't want to see. It was hard enough watching him eat a snake. But hey, an owl has to eat!

After eating a couple of snakes and when the robins finally left him alone, Buddy finally took some time to have a little snooze. 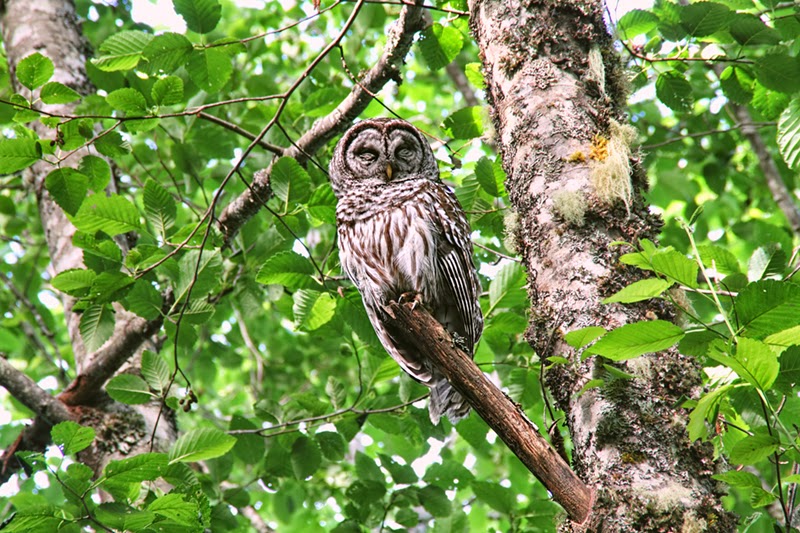 It was hard to get any good shots of Buddy eating snakes or being harassed by robins because there isn't much light where I photograph him. He's very tolerant of me though, giving me time to set up my tripod so that I can shoot him at an ISO of between 100 to 200. I usually prefer to photograph handholding my camera but in this case, it would be impossible to get any decent shots. 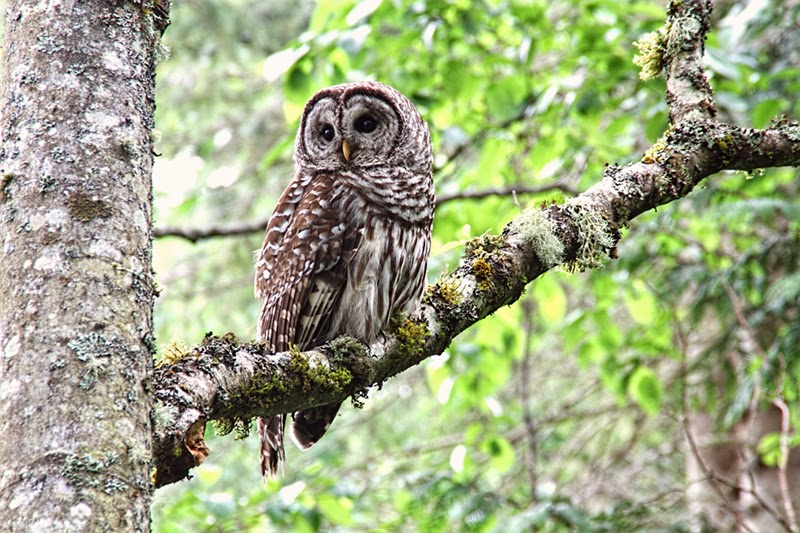 Barred Owl in the Forest

By the way, the first time I came across this owl I had another exciting wildlife encounter. I'd left the trail and walked alongside it briefly to get to the tree where Buddy was perched. I packed up after photographing him very quietly for fifteen minutes or so and started to walk back to where I'd left the trail. All of a sudden I saw a flash of black fur and realized that a black bear was heading towards me on the trail! He ran off into the woods in the opposite direction. It dawned on me that if I'd stayed put, that bear would've walked right by me within another 10 seconds. Hmmm...

The photographs in this post were taken a few days ago but I just returned from photographing Buddy again so look for more owl images in the near future!
barred owls art
Posted by Peggy Collins at 11:54 AM No comments: 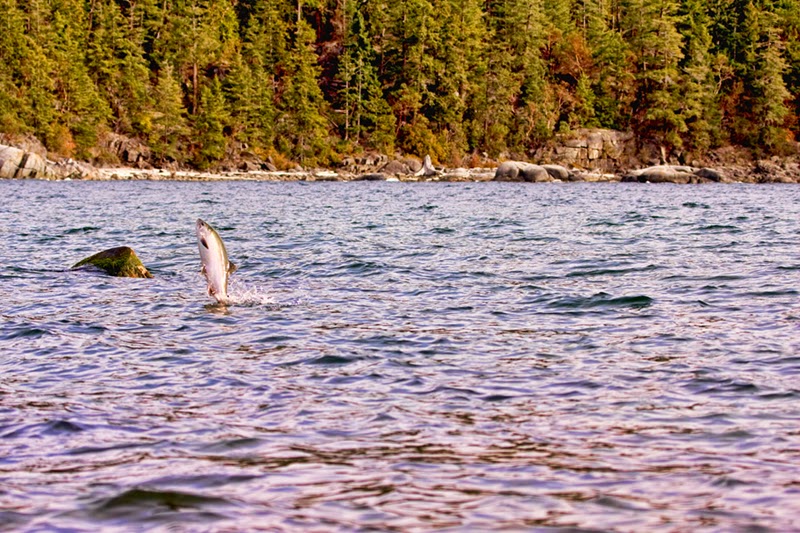 Salmon Jumping in the Ocean

I just sold a print of this Coho salmon that was jumping in the ocean close to home at Sargeant Bay in Halfmoon Bay on the Sunshine Coast of British Columbia.

Before I took this picture I didn't even know that salmon jumped in the ocean before swimming upstream to spawn. I remember parking my car that day and as I walked towards the water I heard quite a loud splash. Excited, I started walking faster and I soon heard another splash, and another. They were coming fast and furious and I couldn't wait to find out what was creating a commotion down at the beach.

Turns out it was the salmon. They are in a kind of holding pattern in the bay for some days before they swim upstream to spawn. Salmon are anadromous...born in freshwater, they migrate to the ocean as juveniles, reach maturity in the sea and return to freshwater when it's time to spawn.

There are a few theories about why salmon jump. Probably the most common is that they're ridding themselves of sea lice. Another theory is that the jumping fish are females trying to loosen the eggs in their skeins before spawning. A third theory is that fish jump because they can, and it feels good. I prefer that theory.

I took this photograph handheld a few years ago when I very rarely used a tripod. I spent a few hours down at the shore, my arms up and my trigger finger poised, trying to get a shot of a salmon jumping. I discovered it was no easy feat because you could never predict where the fish was going to leap out of the water; therefore, it was hard to focus in time on any specific salmon. But eventually I tuned into the fact that the fish often briefly chose a smaller area in which to indulge their acrobatics, so I simply pre-focussed on that area and kept the rest of my fingers crossed. Meanwhile there were fishermen madly rowing their boats to the spots where the salmon seemed to be jumping the most. Only one salmon was caught that day, by a woman, not a fisherman. I had much better luck capturing a salmon with my camera than the fishermen using their rods.

So next time you're down by the ocean in September, go have a look for some jumping salmon. If you're into photography, give it a shot. It's an interesting challenge. Happy shooting!
salmon art
Posted by Peggy Collins at 2:49 PM No comments: