Sometimes I feel like I should have my laptop permanently attached to my body. I could have a screen sticking out from my forehead directly in front of my eyes and my hands could be glued to the keyboard at the wrist.

So enough! The other day I decided to walk down to the ocean to check on the sea stars. As you may have heard, sea stars on the west coast have been dying off at an alarming rate, apparently the victims of some kind of virus, with warming waters a possible factor as well. This die-off was first noticed off the coast in British Columbia in September, 2013. It now extends along the Pacific coast into Oregon and California and in the summer of 2014, populations in Alaska and Mexico were affected as well. Whatever the cause, it has been named Sea Star Wasting Syndrome.

I happen to live by a gap where the ocean narrows and the tide rips through at a fast pace. It's been theorized that fast-moving waters are a more healthy environment for starfish, as sea stars are also called.

I only saw a few sea stars that day. How sad, when they used to be so abundant they were quite often literally piled on top of each other as you can see from the picture below, taken years ago. 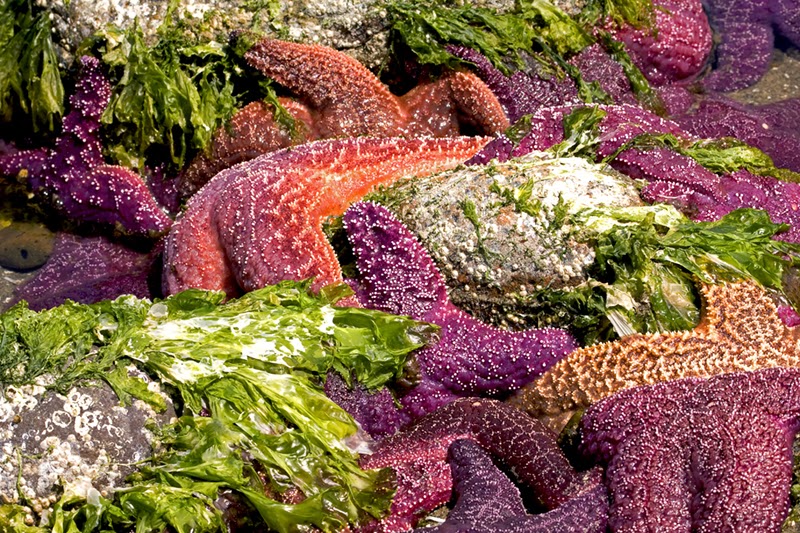 Sea stars were enjoying a population boom before this die-off. And of course, nature has its ways of keeping everything in balance. I recently read an article that suggested baby starfish are now being seen and are possibly making a comeback. I sure hope that's true.