Yesterday I saw my first Northern Pygmy Owl. Coincidentally, a friend had sent me a picture she'd taken of a pygmy owl in her yard just a few days before and I must admit, I was envious.

I've been hiking on the same trail for months now and have seen very little wildlife so I decided to switch it up yesterday and returned to a trail I have hiked often in the past. The road leading to that trail is awful so that's one reason I've been avoiding it, but the other reason is I've seen so many bears there in the past, it got kind of unnerving. But since it's winter now, I figured the bears would be sleeping soundly and wouldn't be bothering me.

Anyway, back to the owl...I swear to you, five minutes beforehand I thought, "I want to see a pygmy owl." I tried to picture what kind of tree I might find one in but didn't really know. So I just kept my eyes open and tried to stay alert instead of zoning out and daydreaming like I usually do. Then I saw what I thought might be a big leaf at the top of an otherwise bare bush. I kept walking towards it, staring at it, thinking, "could it be?" and then...it moved! Hallelujah, it was a pygmy owl! 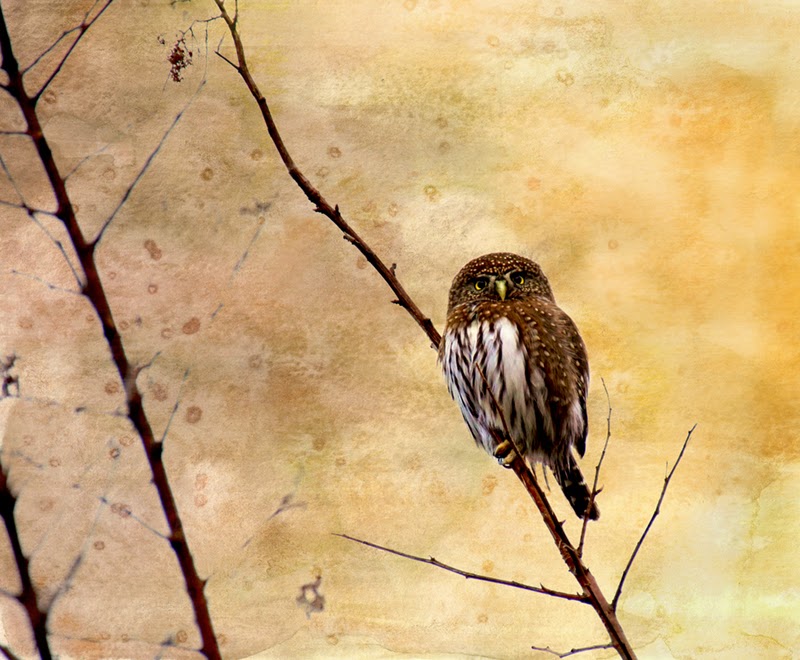 The owl was quite tolerant of me and let me get relatively close. What an amazing looking bird...he was no bigger than my hand. I photographed him from a few different angles then moved on, hoping that the light would be a little better by the time I returned from my hike. But of course, by the time I returned an hour later, he was gone.

I added some layers of watercolors to the photograph because the sky was so white and boring. I want my owl to look a little more artsy.

Last night I had pygmy owl dreams. I sure hope I see another one sometime soon, and not just in my dreams! pygmy owl art
Posted by Peggy Collins at 11:25 AM